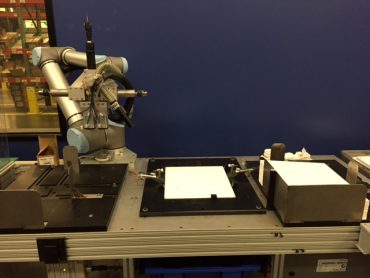 Manufacturers around the globe have now relied on robotic technology for more than 50 years. First used in die casting, robots have evolved into increasingly specialized production tools due to ever-changing developments in software and sensor technologies.

In fact, the International Federation of Robotics predicts that by 2018, 1.3 million industrial robots will be in service in factories worldwide. 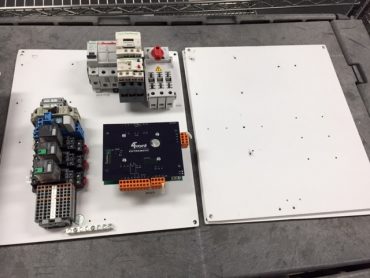 Since August 2016, Carrollton’s control panel lab employees have been successfully working alongside a Universal Robots A/S UR5 model robot.  The robot drills and taps anywhere from 25 to 50 holes in the back plate that’s installed in each control panel box, depending on the particular model in production.

The back plate serves as a mounting surface for all of the electrical components inside each control panel, such as wiring connectors and circuit boards.  The back plate is also the first step in the control panel production and assembly process.  Currently, the lab’s 20 employees are producing about 300 control panels each week.

The UR5 is also known as a collaborative robot (cobot) because it’s designed to work together with humans during assembly operations and actually mimics the range of motion of a human arm.

Carrollton’s UR5 robot performs five basic steps per control panel back plate via four special appendages at the end of the robot’s arm:

The robot then repeats that process over and over all day long without any operator interface.  And for safety, if the robotic arm bumps into any physical object, the robot will shut off automatically. 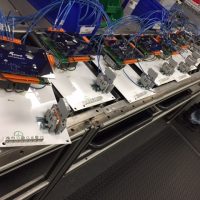 Still drilling after lights out

“The UR5 robotic is a fascinating piece of technology,” says Michael Eastabrook, Vice President, Operations for Entrematic (Loading Dock Products).  “It’s amazing to see it operating once everyone has left for the day and the lights are out. The robot’s still going at it.”

Eastabrook explains that the robotic technology used for the control panel back plates is ideal, both from a flexibility and collaborative standpoint, for small batch quantity production that also involves a lot of variation in the types of parts running. 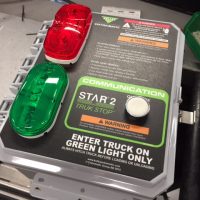 “One of our main challenges is low volume, high mix production,” Eastabrook explains.  “Due to the repetitiveness of the various operations in the control panel lab — such as back plate drilling and tapping — we required a piece of technology that would fit well into that environment.”

Prior to the UR5 robot, and depending on the complexity of the requirements, it would take a control panel lab employee anywhere from 10-minutes to one hour to manually drill and tap holes in each back plate.  Now, those same employees can focus on other important responsibilities.

“Efficiency is a big factor at Carrollton,” emphasizes Eastabrook. “Robotically-drilled back plates are now delivered to lab personnel ready to go so they can populate them with various components. As a result, the UR5 robot has led to increased control panel throughput on an hour by hour basis, and as you can imagine, we’re very excited about that.”